Fibromyalgia is a long-term condition that causes pain around the body.

Similar to post viral syndrome, CFS, and hypoadrenia. The Centre for Disease Control and Prevention define it as a widespread pain around the body, with side effects of sleep problems, fatigue, and emotional distress.

Fibromyalgia in the UK

Fibromyalgia UK  observes that around 14,000 people are diagnosed with Fibromyalgia each year in the UK

According to the NHS, studies show that around 1 in 20 people may have some form of Fibromyalgia. It is also recognised by the Department of Work and Pensions as a real and significantly disabling condition as of 2019.

Fibromyalgia is more common in women than men, and can occur at any age.

According to the NHS, Fibromyalgia consists of various symptoms such as: 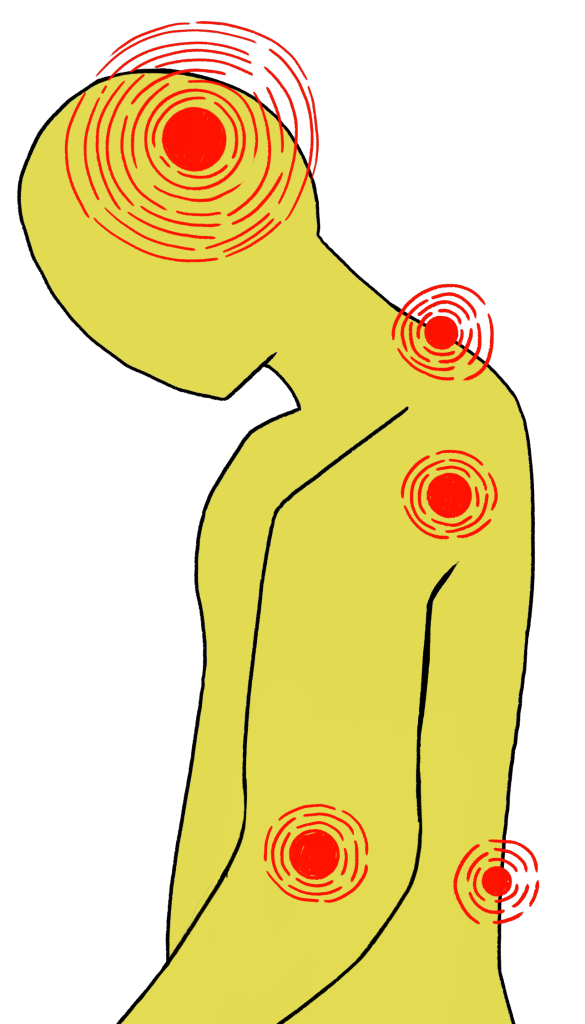 There are various other symptoms related to Fibromyalgia. These include Irritable Bowel Syndrome (IBS), dizziness, overwhelming restlessness, painful periods, pins and needles, and irregular body temperature.

Mental health issues can also arise from dealing with the difficulties of Fibromyalgia. As the individual is often experiencing many negative effects from hormonal imbalances, people can feel isolated and hopeless, and lose enjoyment in activities that they previously enjoyed. They may also feel incredibly anxious about returning to regular life as they believe they will be unable to adjust accordingly.

The Mayo Clinic in Rochester, MN, USA observe that Fibromyalgia often occurs after a traumatic event on the body, such as post-surgery, physical injuries, or psychological stress. Other significant events include childbirth, the loss of a loved one, or the breakdown of personal relationships. Whilst a lot of cases originate in trauma, it is possible for Fibromyalgia to develop over a long period of time with no known triggering events, making it a widespread issue for many adults.

The exact cause of Fibromyalgia is unknown, but studies show that it is related to an abnormal change in certain chemicals in the brain. From this the central nervous system begins to process pain differently. It is also hypothesised that it can be inherited from parents.

The NHS will offer diagnoses through a GP. They will ask you questions about pain and other symptoms throughout your body, and try to narrow down what the disease might be. GPs will often seek to rule out the chance that patients might have arthritis, chronic fatigue syndrome, or multiple sclerosis.

Testing for these different diseases can include blood and urine tests, as well as x-rays.

The machine we use in-clinic performs a comprehensive health scan, showing 11,000+ different pathogens and problematic areas in the body. We offer these machines for rental use, or to purchase on their own. You can find more information HERE.

We are not a replacement for your general practitioner. If you are experiencing symptoms, please consult a licensed health practitioner first.

What Treatments are Available for Fibromyalgia?

As Fibromyalgia has many different symptoms, it can be difficult for GPs to diagnose it accurately. They may start with addressing the most urgent symptoms.

GPs will often focus on the immediate pressing symptoms and can prescribe a range of anti-biotics or anti-depressants to help a patient.

Painkillers include paracetamol, codeine, and tramadol. Anti-depressant medication can include SSRIs such as Prozac and Citalopram, as well as SNRIs such as venlafaxine and duloxetine. These specific medications carry the risk of side effects such as dizziness, drowsiness, dry mouth, increased anxiety for a time, weight gain, and constipation.

Throughout this process, a GP may transfer you elsewhere based on your symptoms. Specialists such as rheumatologists, neurologists, and psychologists are common referrals for people dealing with Fibromyalgia. Rheumatologists may prescribe immune system-suppressing medications.

As symptoms of Fibromyalgia vary considerably, what works for one person may not work for another, making it even more difficult for GPs to accurately tackle all the symptoms at once. There is also a risk of prescription resistance, where a patient requires a higher dosage of medication over time as their body becomes more used to the medication.

GPs can also offer medication based on specific symptoms, ranging from sleep medication and muscle relaxants to anticonvulsant and antipsychotic treatment. Alongside medication, GPs can recommend alternate therapies. Cognitive Behavioural Therapy (CBT), psychotherapy, and counselling can help patients talk about their issues to better tackle them. Relaxation techniques such as yoga, massages, and regular exercise are also encouraged.

How Does PEMF Help With Fibromyalgia?

Studies have shown that Pulsed Electromagnetic Field (PEMF) therapy can be a beneficial treatment for symptoms of fibromyalgia. The therapy provides easy-to-apply relief and harbours no known side effects. The main results found through PEMF therapy are: 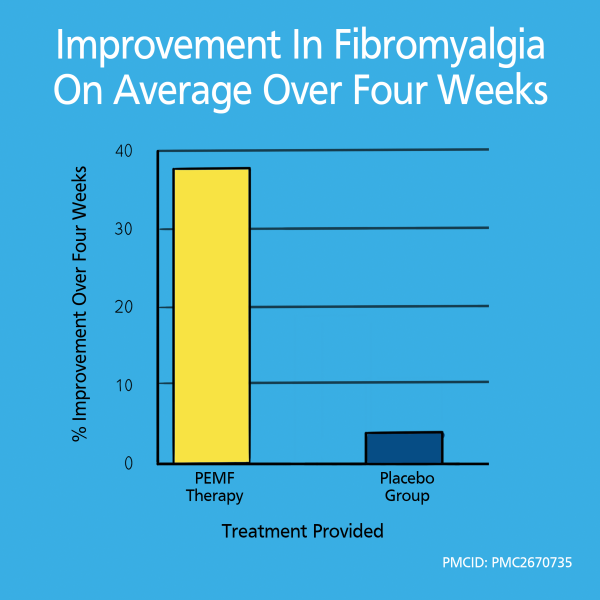 A study in 2007 is an example that highlights the benefits of PEMF treatment for Fibromyalgia. In a mixed gender demographic, the study split members into two groups. One would receive genuine PEMF treatment, whilst the other received a placebo. The study, conducted over four weeks, found:

Other studies have shown similar results. A more recent study, published in 2020, observed that PEMF therapy relieved pain and improved function for patients suffering from musculoskeletal diseases. PEMF therapy was also shown to have no reported negative side effects, and only required low wave intensity to produce pain relief and removed the risk of addiction as found with pain medication.

Try a Drug-Free Treatment for Fibromyalgia

However, we’ve seen positive results so far which give us hope for recovery or at least better management of Fibromyalgia that could lead to reducing reliance upon pain killers and other pharmaceutical solutions.

At our not-for-profit Centre based in the Bristol area, we’ve launched a concessions clinic to offer therapy for Fibromyalgia at the most affordable price possible while we remain fully self-funded. Using our state-of-the-art easy-to-use software, patients can choose from a wide range of symptoms that need treatment. Once chosen, the patient can sit back and relax whilst the machine proceeds with the therapy. 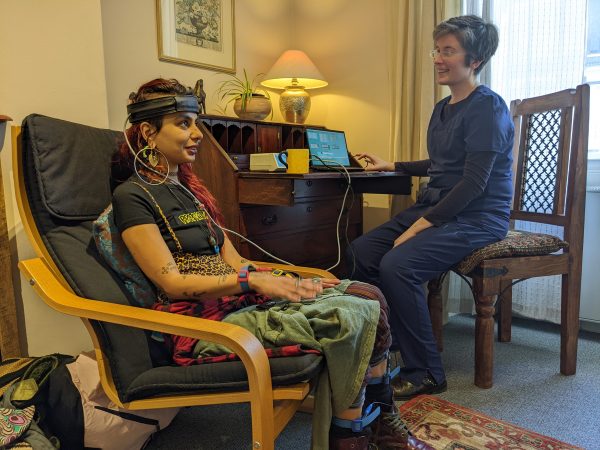 We cannot make claims to cure or treat Fibromyalgia yet, because there is not sufficient clinical evidence to support PEMF therapy for this condition.

However, we’ve seen positive results so far which give us hope for recovery or at least better management of Fibromyalgia that could lead to reducing reliance upon pain killers and other pharmaceutical solutions.

At our not-for-profit Centre based in the Bristol area, we’ve launched a concessions clinic to offer therapy for Fibromyalgia at the most affordable price possible while we remain fully self-funded. Using our state-of-the-art easy-to-use software, patients can choose from a wide range of symptoms that need treatment. Once chosen, the patient can sit back and relax whilst the machine proceeds with the therapy.

How Long Do Sessions Last?

Sessions for Fibromyalgia last around 60 to 90 minutes.

How Many Sessions Will I Need?

It is still unclear how many sessions are generally needed, because every patient is individual and the therapy is still being studied carefully. We estimate that weekly sessions spanning 2-4 months would be needed to see long-lasting recovery or ‘remission’ from Fibromyalgia.

You will feel an improvement after the first session, so don’t feel pressured to book multiple sessions up front. Take things slow, and try your first therapy and see how it goes. Our SCIO machines are available for rental use at home. We can also offer therapy at a discounted rate through our Concessions Clinic. You can learn more by clicking HERE.

If you are interested in booking a session for Fibromyalgia, get in contact with our Lead Practitioner, Kasey, at admin@ncet.co.uk. You can call NCET at 03301 3301 83.

The machines we use in-clinic are also available across the UK for home rental use.  Please contact admin@ncet.co.uk for more information.